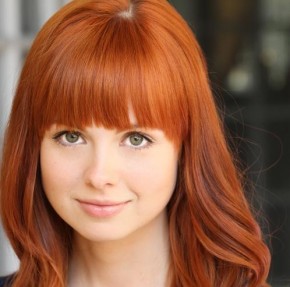 21 year old Galadriel Stineman just could not get over the acting bug. After pursuing other endeavors, Ms. Steinman – a Kentucky native with long red hair – decided the odds of succeeding in acting were in her favor. So far, she has had roles in the hit HBO TV hit series True Blood, as well as a role in the upcoming Hallmark Channel TV movie Operation Cupcake, airing this weekend on June 16th, in addition to other projects. Galadriel has put together a nice acting portfolio for herself, as her horizons continue to expand. You can read the highlights or hear the entire CYInterview, with this talented actress from the bluegrass state, below:

In focusing on her path to becoming an actress, Galadriel provides some great advice and wisdom for any aspiring performer:

“I have always felt like there’s no point in doing anything that you’re not going to do 100 percent. It’s not gonna be successful and you’re not gonna find satisfaction in it. So once I decided that this was actually what I was going to pursue, I knew that all the parts that I had control over in this business is actually a small percentage, but that I would make sure and be all in on those parts.

And also it’s really important to network and build these relationships and for the benefit of it and then it’s amazing when you’re in need or when other people are looking at your career from the outside, what they can offer you that you don’t even ask for and of course you only get that by building those relationships with the best of intentions, but you know if people like you and they’ve seen you work and they think that you have something they’re usually more than happy to help if they can.”

The actress stars alongside Dean Cain and Kristi Swanson in the Hallmark Channel movie Operation Cupcake airing this weekend. It’s about a military father and a mother who owns a cupcake business. Galadriel says she was not the rebellious daughter growing up that she portrays in this project. Ms. Steinman talks about what it was like to work with both Dean and Kristi:

“Dean was great. He’s such a pro and I love watching him work. He can fly in the morning of from doing some publicity event and just always know what he had to do and just do it really well. The other thing that I really liked about what he did on this project was obviously military is a big thing for this and you know he plays a career military man and it was so important to him to be accurate in the details about portraying a guy in the military that he went to such lengths to make sure every part of his wardrobe matched…

Although he’s been involved in the military throughout his life, he’s never actually been enlisted. So I think the great thing about that is that I believe if people in the military watch this, they’ll feel like they were portrayed accurately and honored which doesn’t really happen all that often in show business…Kristi is great. We had such a fun, bantering relationship. We became more like sisters I think than anything else on set that she is so fun loving and so passionate and just this really sensitive affectionate person and this was just a great energy on set all the time between both Dean and her and it was just a really fun place to be.”

Ms. Stineman is not a natural redhead. In Hollywood, women with red hair seem to be few and far between. Galadriel says there is one advantage to having red hair. She also talks about her hopes for the future:

“I can say I think it’s easier to get called in for auditions when you have red hair because they’ll throw a few redheads in the mix when we have so many blondes and so many brunettes, but after that point it doesn’t really make a difference once you’re talking about commercially because it’s really about what you do and you know what you do with the character. So it’s always great to have anything that helps, can help you get in the door…I really hope for the future I can start creating roles for myself and just continue to express myself because every day that I get paid to do this is just you know is the ultimate reward. And I’d probably work for free, although you know, shouldn’t tell that to a lot of people.”

Operation Cupcake debuts June 16th at 8:00 PM EST on the Hallmark Channel. You can find more information about it clicking here.