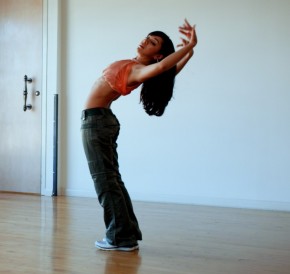 With many college students finishing their degrees in the face of a challenging job market, actress Aimee Garcia’s lead role in a dance flick might provide them with an inspirational message. The Chicago native’s role as Carmen in the hoof-shaking film Go For It is out, this Friday, in about 150-200 movie theaters nationwide. It’s a young adult tale of confusion, self-doubt and the soul searching that teaches people in their teens and 20s a tough lesson; if you’re not an individual and quit on your dreams, you only have yourself to blame.

In speaking with Ms. Garcia for this CYInterview, it’s apparent that her lead role in Go For It – an independent film – was a labor of love. However, some of the individuals on Aimee’s team were concerned about her choice of role. As an aside, many of you will recall Aimee’s work on George Lopez and Trauma.

“It’s one thing to say you can carry a movie and it’s another thing to actually do it. I think that unless you’re Kate Beckinsale or Angelina Jolie, it’s rare to have the opportunity to really carry an entire film and especially if you’re Latina, that doesn’t come along too often either. So I am stoked because this was a labor of love, this movie is an indy that should have never seen the light of day. My entire team said, ‘Don’t do this. This is a first time filmmaker, there’s no studio attached, there’s no money, why you gonna risk doing this role?’

I said, ‘I have to. I have to tell this story because you rarely see a woman and a Latina be different things. Feisty. Funny. Strong. Sexy.’ I feel very lucky I get to be all of those things. I get to do my own dance scenes. There’s no guy with the wig. There’s no body doubles. I trained for eight months. I have the bruises to prove it. I always said to myself if I ever have the opportunity to do my own Flashdance, I will do my own dancing.”

Applying a can do mindset, no matter what life’s circumstances, is a big part of the message of Ms. Garcia’s latest work. Whether it’s underachieving friends or family, lack of resources or a generally negative economic climate in today’s America, teenagers and young adults have to work hard towards their long term goals, casting aside the allure of instant gratification. Aimee explains how that theme relates to her film, providing some analysis:

“The whole point of this film is to be an inspiring film. To kind of tell teenagers that they shouldn’t be, and young adults, that they shouldn’t be limited by what they see and what’s in their environment. I think that in the same way that behind the scenes, we all dreamt big, I didn’t know if only my parents were gonna see this movie. I had no idea that Lions Gate would pick up this film.

I just followed my gut and I worked really hard and I think that you even have to take an internship somehow and really just work really hard and prove yourself that that will lead to something. I think times like this really force us to think more long term than short term, so hopefully people will see this film and say, ‘Wow! She didn’t have it easy. She was able to really reach her dreams. So if she can do it, so can I.’ Cause we’re very influenced by what we see.” 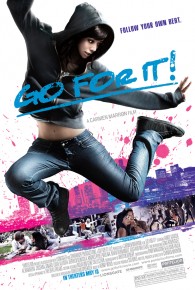 Aimee agrees her current film gets right to the point and doesn’t sugarcoat what it takes to accomplish goals. You either want to be something in life or you don’t:

“A lot of times people don’t have role models in their home right? So they have to kind of see beyond that and I think yeah, you’re right, I think that people kind of have to not give up. I would say there’s two different types of people, there’s people that hit a speed bump and then throw in the towel and then there’s people that get knocked down and get back up…So it’s not falling down, cause everyone is going to fall down. It’s if you get back up.”

In promoting Go For It, Aimee has been speaking to kids and sharing her message about how to keep going when the going gets tough. She thinks of her parents and how they sacrificed for those acting dreams she’s made a reality. Ms. Garcia reflects on how she wouldn’t be living by her word if she tells people not to quit but she were to. Additionally, she knows time, in life, is limited:

“Life is so short. Not to be macabre, but every second we have less time. So we have less time now than when we started this interview. So I think what are you waiting for and what’s the worst that can happen? You fall. Ok. Fine. Everyone that has been successful has fallen.”

Though she says an actress will never reveal her age, research leads me to believe Ms. Garcia is over 30. Many can’t believe Aimee’s age when they find it out. Personally, I feel she doesn’t look a day over 25. I asked her if there were any secrets to looking so good:

“Sleep. It’s the cheapest. Sleep, water and laughing. I know that probably sounds so Yogi Bear, but it’s true. I think your skin looks great when you sleep, you need less makeup when you sleep. If you hydrate, you get less lines, don’t smoke, exercise every day and then get some good friends and laugh and that really builds up your immune system.”

Being part Mexican, Ms. Garcia says that fellow Hispanic actress and native of Mexico, Salma Hayek is a definite role model. Aimee hopes to produce one day, like Ms. Hayek did with Ugly Betty.

“Definite role model. I would love to actually build my name as an actress like Salma did and then lend that to open doors for other people like she did with Ugly Betty. Actually, I don’t know if a lot of people know, Sandra Bullock was actually our executive producer on the George Lopez show. So while she was off in Europe shooting romantic comedies, she was opening doors for young actors and the Latino community. So I would love, love, love to end up producing. That’s definitely a goal of mine and Salma Hayek is definitely a role model and we all need role models. She’s definitely one of mine.”

As I frequently do, I asked the question, “What should we know about you that we don’t? Ms. Garcia’s response is, arguably, one of the best yet.

“That’s a good question. I guess that I’m really grateful I guess. I guess for anyone who has kind of supported my career and you know, I say kind of thank you. I don’t know. I guess I just feel super, super, super, super lucky. I don’t know what I did in my past life to deserve this one, but I guess what I would want them to know is that whenever I feel lost, I think of three things. My dad always said, he said, ‘The most important things in life are number one health because if you’re not healthy you can’t help anybody, you can’t have fun. Number two family and friends. Number three, education.’ So whenever I feel lost, I kind of stick to those three things and they’ve led me in a pretty good direction.”

Go For It opens, in limited release, on May 13th. You can find more information at http://www.goforitmovie.com