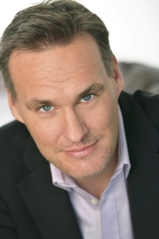 From working in a movie theater to being on the big screen, the story of actor Jon Donahue is one of persistence and triumph. In a few weeks, more film enthusiasts will know his name as he stars alongside Tom Hanks, as Professor Robert Langdon, in Inferno. The film is the third one based off the popular Dan Brown books. The 2006 movie The Da Vinci Code and the 2009 film Angels & Demons, the two prior films, were blockbusters. Inferno is slated for release later this month.

In the film, Jon Donahue plays the role of Richard Savage, an employee of the World Health Organization. Throughout the movie, he is in pursuit of Professor Langdon. The filming of Inferno took him, Tom Hanks and director Ron Howard all over the world, including Budapest, Italy and Turkey.

Telling us about his character, Richard Savage, in Inferno, Jon Donahue tells us this:

“Richard is a no nonsense guy. He works for the World Health Organization. He’s an aide to his boss who’s the head of the World Health Organization played by Sidse Babett Knudsen as Dr. Elisabeth Sinskey. There it is. So I worked for her and I take orders from her and we again, like I mentioned, we are on the chase after Langdon and Felicity [Jones] who is Dr. Sienna Brooks in the movie. And you don’t know kind of if we’re good, if we’re bad. Langdon has a head wound in this movie.

So that’s a big difference between this film and the other two is that Langdon doesn’t have all his faculties in this one. He has a gunshot wound and so he has amnesia. He can’t remember pretty much anything and he is the one who can pretty much save the world. So we as audience members get to find out with Langdon, you know, every piece of the puzzle as it comes along. It’s a lot of twist and turns.”

Like The Da Vinci Code and Angels & Demons, Inferno is also being directed by Ron Howard. Mr. Donahue shares this about him:

“He loves movies. So we would talk movies a lot. I’m a big movie nerd. So we would just talk films and that was fun ‘cause he’s got so many stories. And he and Tom Hanks go way back. Tom was even on Happy Days. So they go way back. So it’s fun listening to those two talk about films and their career and I just love the whole atmosphere of working on a Ron Howard film.”

Over the years, Jon has worked on multiple movies with Tom Hanks. He shares a funny story from the set of Inferno:

“There’s a scene in this film without giving anything away where it was me, Tom and Irrfan Khan and Sidse Babett Knudsen and we are all, you know, in this cathedral together running and chasing and all kinds of stuff. And I just remember Tom, he knows I’m a Star Trek fan as well, so is he. And he said, ‘You know, if this was Star Trek you’d be wearing a red shirt and you’d be off and we’d hear screaming, you’d be dead.’ Because if you wore a red shirt in Star Trek, you were pretty much gone.

I don’t wear a red shirt in the movie, but I don’t know if he felt bad about that but the next day I get a card and a package in my trailer and I open up the package and it’s a red Star Trek, literally a uniform shirt from the original series. And the card read, ‘You are not expendable.’ And I thought that was really cool. That was a lot of fun. So I wore that Star Trek red shirt when we were off from work and he got a kick out of that.”

For years, moviegoers have been watching Tom Hanks on the big screen. Though some movie stars reportedly are difficult to work with, Jon says that is not the case at all with Mr. Hanks:

“He’s a good guy. He really is. He’s great to work with. He’s, just watching him work and working alongside him, it’s an acting school every day and he’s so nice to everybody on the set. It really just teaches you just so much more than acting that it doesn’t matter how big you are in the industry, you don’t have to be a dick and he’s awesome. Not that everybody in the industry is a dick. He’s just a nice guy. He doesn’t carry that movie star, you know, stigma that, you know, you’re unapproachable or something. He’s really great.”

When it comes to his acting career, his future is no doubt bright. Reflecting on where he is in his life today, Jon Donahue tells us this:

“Just to be this movie nerd, to love acting and to get a chance to work with your heroes that people you grew up with, people you admire and to be a part of this world is amazing and I’m really excited about Inferno because it’s pretty exciting. It’s a great film. It’s a lot of fun. It’s fast pace. It moves and to be working with Tom again and Ron Howard, it’s a great thing.”

Photos for this piece are credited to David Carlson.