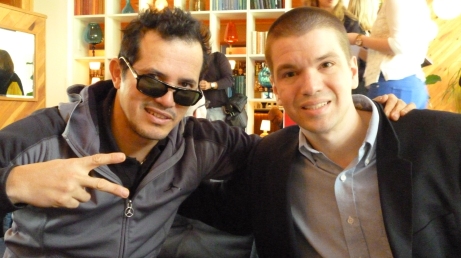 For over 25 years, actor John Leguizamo has shown us his acting abilities in a variety of diverse roles, on television and in the movies. At the Miami International Film Festival a few weeks ago, the actor sat down with me to talk about his first full length Spanish language film, which was shot in his native Colombia. As we began speaking prior to our CYInterview, I realized how easygoing and fun John is. He is that friend you go to a football game or bar with and chat for hours about anything.

As one of the nation’s leading Latino entertainers, the actor shared with us his thoughts on the state of Hispanic entertainment in America. He also spoke with us about what his career has meant to him and why his Oscar ambitions have dimmed.

This year’s Miami International Film Festival was the first for John. One of his earliest acting roles has a Miami connection; he was on an episode of the hit TV show Miami Vice in the 1980s:

“I remember I was like 18 years old. They flew me down here and this was a really defunct, you know nobody was here. We shot in one of the hotels on the strip. It was, nobody, not a soul in an empty pool with me and Don Johnson and Michael Phillip Thomas.”

Staring in El Paseo 2 [English Translation: The Trip 2], the actor says this is his first full length Spanish language movie. The film is a sequel and was a huge commercial success in Colombia. He explains why it was so popular in his country of origin:

“They see themselves. I mean, you know most movies are foreign and it’s one of the few movies that’s really positive image about the local culture and they see themselves you know. This was the biggest opening of any movie in Colombia. It beat Skyfall; it beat The Hobbit; it beat everything. And so, you know, there’s a really healthy movie industry in Colombia.”

As one of the Latin community’s leading entertainers over the last two decades, Mr. Leguizamo gives us his thoughts on the state of Hispanic entertainment in America:

“There’s a real hunger in the United States for Latin people to see themselves in comedies, in dramas. They’re dying to see themselves. You know when I tour with my one man shows, I mean, 70 percent of the crowd is Latin, you know everybody else is white and Afro American, but they pay crazy dollars to see somebody telling their tales. … They’re not enough programs dedicated to telling Latin stories and once you get that and you get it really competitive, it’s gonna boom, it’s gonna be a huge boom. I mean, we have $1.3 trillion dollars of buying power in the U.S. alone. That’s not even including Central and South America. That’s just in the U.S.”

From Carolto’s Way to Collateral Damage, Moulin Rouge to Romeo and Juilet, Too Wong Foo, Thanks for Everything to the Ice Age Franchise, John has had a chance to show off his talents in many genres. This is how he sums up his career:

“I always wanted to do something challenging. I mean that was always my M.O. I always wanted to be challenged, you know and that’s what I did. I went out for the most difficult roles, stuff that would shake up my world and I enjoyed that. You know it really fed me.”

Though his performing career will likely continue for years to come, the actor admits his Oscar ambitions have faded:

“Not as much. You know, I don’t know, something happens you get to a certain age, you’re like you know the thing that you dreamt, you thought the Oscars were the greatest and to think and realize it’s not really. A lot of movies win that I’m really not that enthused about or actors win that I’m not crazy about. So it just becomes more realistic.”

You can find more information about the Miami International Film Festival at their official website here.