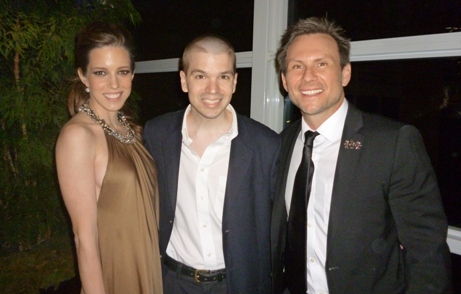 This past Saturday evening, Actor Christian Slater, Miami’s media personalities and the city’s philanthropic and community leaders came together for the annual Be A Voice Gala in Brickell. The event was held at the Mandarin Oriental Hotel. This annual event raises money for the not-for-profit Voices for Children Foundation, which helps assist abused, abandoned and neglected children in Miami Dade County. The organization works to ensure that all minors in need have an appointed Guardian ad Litem (legal advocate to represent their interests.)

Above is a photo of actor Christian Slater and his girlfriend, Brittany Lopez, along with yours truly. The couple served as the honorary co-chairs for the evening. You will recall our CYInterview with Christian last year, at the Miami Make-A-Wish Ball [see here]. We had another chance to speak with the actor and in the coming days you will have the opportunity to hear our latest conversation.

In the meantime, you can check out of the photos below, showing some of the evening’s other illustrious attendees.

You can find more information about the Voices For Children Foundation at their official website here.

One Reply to “Actor Christian Slater, Other Miami Luminaries Come Out to Support the Voices for Children Annual Gala in Brickell”