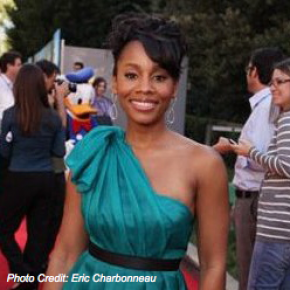 Anika Noni Rose, the beautiful woman with the beautiful name, is among today’s brightest lights in acting and performance. She has moved elegantly from stage to movies to television, receiving significant accolades in the process.

From May of 2002 to August of 2004, Ms. Rose performed in the musical Caroline, or Change, garnering a Tony for her role. In 2006, she teamed up with, Beyonce Knowles and Jennifer Hudson in the Academy Award nominated movie Dreamgirls. In 2008, Anika returned to Broadway, as Maggie in Tennessee Williams’s Cat on a Hot Tin Roof. This year, 2009, HBO aired the first episodes of its series The Number 1 Ladies Detective Agency with Anika starring alongside Jill Scott, as a detective’s assistant. The program was shot on location in Botswana Africa.

Anika’s diverse resume will be capped off with her latest work – the lead, voiceover role as Disney’s first black princess in The Princess and The Frog – out in theaters Friday. The musical is Disney’s first animated movie in nearly six years. Rose beat out other performers vying for the role, including some who waged public relations campaigns to show how much they wanted to be Princess Tiana.

With her singing and acting talent, Anika brings much personality, strength, humor and a voice destined to be remembered for generations. Rose’s Princess Tiana, deemed a strong heroin, is likely to enter Disney’s pantheon of immortal characters.

2009 has been a year of momentous social progress. The United States of America is now led by a person of color, a prospect that a few short decades ago seemed highly unlikely. And now Disney – a company that has long held sway over the popular imagination – is introducing a major, holiday production with a black woman at the center of the story. The progress continues.

As for Anika Noni Rose, she’s now an acting quadruple threat. To star of stage, screen and television, she can add voice talent par excellence to her already impressive resume.

For Ms. Rose’s personal life, what of a prince for this princess? Anika confides to me that the only prince in her life, at the moment, is her four year old nephew, at least that is the only one she will mention.

Chris Yandek: As an actor, you’re a triple threat. You go on stage, film, television, now voiceover work in film. Do you prefer one medium over the other?

Anika Noni Rose: “I don’t. And it’s hard to say that I have a preference over one or the other. What I can say is that stage is my home and that’s the thing I know I will always go back to because it is the thing for me that I think keeps me fresh and real and growing, which is not to say you can’t do that in film or television. I’ve been really lucky to have some very unique roles in the projects that I have done.

But I can’t imagine not doing stage. I feel like people get to a point in their lives or maybe they don’t do TV anymore or maybe they don’t do film anymore, but there is always a place on the stage if you created that niche. But I sort of love everything that I’ve been able to do because they’re all a different way of flexing your muscle even though I approach the acting in the same way, creating the character and making them come to life. It’s a different way of challenging yourself.”

CY: You performed as Maggie in Cat on a Hot Tin Roof. Did you look at the film version, with Elizabeth Taylor – in the role of Maggie – for any inspiration? Maybe Kathleen Turner on Broadway? Or Natalie Wood or Jessica Lange when they did it on television?

ANR: “I did not. (Laughs) I saw the Elizabeth Taylor version a long, long time ago, but I feel like if I’m doing that role someone else has done, to me, it’s up to me to create that character and out of respect to the person who did it before me, I don’t look at what they’ve done. Maybe I look at it afterwards, revisit it. I try to look at what the playwright is saying and bring my experience to that so that I can create my own version of that character. So I don’t want to put – and not to say anybody copies what somebody else is doing purposely, but I think that sometimes when you watch something, you might hold on to something you love subliminally and incorporate that and I don’t want to do that. So I didn’t look at any of their performances beforehand.”

CY: You beat out so many other great talents for this role as Disney’s first black princess. You’ve won a Tony, but does it get any better than this?

ANR: “It feels like no right now, but I have to say I hope it does continue to get better. (Laughs) I can’t imagine what it would be, but every time I think to myself gosh, what am I going to do now? That was pretty amazing, that experience. Something else comes along that is as amazing or more amazing in another way and I hope that my life continues to move in that way. It’s a really special thing to be able to keep being surprised by your work and by your opportunity.”

CY: Well, I keep hearing the discussion about how Princess Tiana is a strong Disney character. Through your entire career, what were some of the moments where you had to be strong when things weren’t going the way you wanted them to?

ANR: “You know, it’s interesting, that’s a hard question to answer. In a general way to answer that question, what I have learned as an actor, as an artist is not to fret about what’s going to be next. What am I going to do now? I hadn’t worked for a month. Oh my goodness. It used to be like that when I first started out, if I wasn’t working for three or four weeks, I started to get antsy about it. But I’ve gotten to a point where I don’t worry.

I know that something is coming and I may not know what it is or how it’s going to work out, but I know that I’ve put the work in and work begets work. The challenge in that is allowing yourself the ability to relax, to not feel that you have to prove your presence in the silence, but that your presence has left its mark and that someone will feel that energy and see the work and that you will continue to move forward.”

CY: So discussing that moment, any princess dreams for yourself growing up? Anything of that nature?

ANR: “I dreamed of being a Disney voice. I did not have the aspirations to be a princess like actively, but I just wanted to be a voice. So I didn’t care if I was a kitten or like a leaf or shoelace. I just wanted to be in a Disney movie so badly from when I was very, very little, I was very – I feel like Disney has sort of been the soundtrack to my life. I can remember points in my life in the movies that are with that time or a situation or how I felt in the theater. Fantasia was my first movie.

I think I was two when I saw Fantasia. My mother told me that the dancing mushrooms looked like me and I felt like, she had said the moon was shining on me and that was the beginning of my great, great love for Disney. So to end up being a princess, my goodness, that was like I threw that wish out in the air and it was caught by the grandam of wishing stars and thrown back to me in a wonderful cascade of light. It was not at all what I expected.”

CY: In the movie you’re performing with Oprah who plays your mother. What was that like? Even though you are a highly skilled, exceptionally well trained professional, did you ever become intimidated?

CY: Cause of the voiceovers you guys are separated?

ANR: “Yeah. It’s voiceovers. You don’t work together. I don’t spend a lot of time becoming intimidated. I feel like, and this is not in response to Oprah specifically cause we didn’t work together, but I don’t think there’s room for intimidation. If you come in with your A game and you know what to do and how you’re doing it, why would you be intimidated? Why isn’t this just a meeting of talents?

Something that you both, whoever you are, can use to take your game a little higher and feed off of each other. And that’s the wonderful thing that when I worked with Eddie Murphy, we clicked so beautifully. It was like seeing, you know what it was like? It was like seeing the Williams sisters play each other. So every time you think that ball has been hit as hard it’s going to be hit, somebody hits it back like139,000 miles per hour in response. That’s what you want as a performer. You want to know that that ball is coming back as hard or harder than when you hit it and that’s an amazing and beautiful thing. Intimidation is something that’s I think pointless.”

CY: What do you think black princesses across the world in Europe and Africa would think of this film in general?

ANR: “Well, you know, I hope that – cause when I see the – I don’t know. I hope that they’re just happy that finally somebody said, ‘Oh yeah. You all exist too.’ (Laughs) Because it’s a fairy tale. It’s our version of what that is, but I think that is not a part of history that our history books spend a lot of time on and this is not a history lesson, but just a recognition, which is, sometimes you’re just happy for the recognition and then it opens the door for people to talk about the true thing later.”

CY: Finally, here’s the big one, has Ms. Anika Noni Rose found her prince charming yet?

ANR: “I have a lovely prince. He’s four years old and he’s my nephew and I adore him and that is the only prince that I will talk about even a little bit. I don’t want to put his name in the public, but he’s my favorite prince in the world.”

CY: Anika Noni Rose, thank you so much. Good luck. Hopefully we can talk again in the future. This was great.

ANR: “Thank you so much. I appreciate it.”

The Princess and The Frog opens in theaters nationwide December 12th. You can check out the movie’s official website at http://disney.go.com/disneypictures/princessandthefrog/

One Reply to “Acting’s Most Beautiful Rose: Anika Noni”