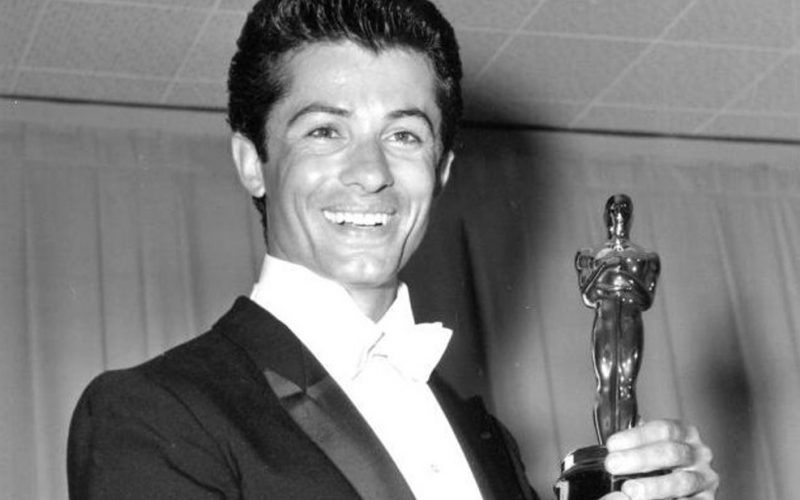 West Side Story is one of the most famous musicals in American history. First a theater production and then the 1961 movie that won the Academy Award for Best Picture, both offerings of West Side Story almost did not become a reality.

Oscar winning actor George Chakiris was in both the theater production and the 1961 film that won him a Best Supporting Actor Academy Award for his portrayal of Bernardo. His victory came at the 1962 awards show. In all, West Side Story took home 10 Oscars that night.

The actor, now 86, has written a new book titled My West Side Story: A Memoir. Aside from an autobiography covering his career highlights and his work with many of Hollywood’s golden age stars, his book goes into great detail about how West Side Story came to be.

The night of the 1962 Academy Awards, George Chakiris and co-star/longtime friend, actress Rita Moreno did not expect to win Oscars. Both went home with the golden statue. In the Best Supporting Actor category, George beat out Hollywood greats including Jackie Gleason and George C. Scott. His acceptance lasted a matter of seconds.

On what he wished he had said during his acceptance speech at the 1962 Academy Awards, George Chakiris told us this:

“What happens now, people are obligated to thank many people in the course of making a film or television series, whatever. But at that time, people didn’t really do that. So, Rita’s speech and mine, of course, as you said, were very short and my only omission, again I’m repeating this, I’m so sorry, would be that I didn’t have the presence of mind to thank Jerry Robbins or Robert Wise.”

Before his career as an actor, Mr. Chakiris broke into show business as a dancer. He took part in many dance numbers in movies and TV shows, with the likes of Marilyn Monroe, Rosemary Clooney and Dorothy Dandridge. In the mid-1950s, he came to Las Vegas to work with dancers who were part of a series of concerts that Judy Garland performed at the New Frontier Hotel and Casino, on the Las Vegas Strip. Here are some of his memories of his time with Judy Garland in Las Vegas:

“She learned so, so quickly that she didn’t need a lot of rehearsals. She didn’t need to keep doing it over and over and over again. She learned so quickly. … She wasn’t tall. She was about 5’1 or something like that, but she always came to rehearsals in black tights and a man’s shirt and she was very funny. She loved talking to the guys between rehearsals and she had some really, very funny jokes to tell and anyway, she was extraordinary to be around. One of the things that I always felt about her, when she looked at you, I felt like she could really see right through you. She could see who I was without saying anything. She had an extraordinary capacity I think to just understand people and see who someone really was and Liza was probably about 13 or something like that at the time, Liza came to rehearsal quite a few times and she loved to learn. So, I taught her some of the steps the guys were doing and just like her mom, she learned so fast. So, it was just a wonderful time to be around someone as extraordinary as Judy Garland.”

In the movie Gentleman Prefer Blondes, Marilyn Monroe’s dance number, Diamonds Are a Girl’s Best Friend, is one of the most famous in cinema history. George was one of the dancers in that scene. The actor notes in his memoir that he worked with Marilyn Monroe. He did not know her personally. On what he learned about her while working on set, the famed dancer shared this:

“One of the things I noticed about her was, whenever they cut for any reason, she never, she didn’t look in the mirror, she didn’t go to her dressing room, she went right back to her starting position to start again. So, what that led me to believe and actually see was how concentrated she was on her work and she didn’t waste time talking to people. She was just so, she was quiet, she was very quiet. Every time I saw her, she was always very quiet. And I really liked that about her and seeing her dedication to her work.”

Focusing on the Diamonds Are a Girl’s Best Friend dance scene in a Gentleman Prefer Blondes, Mr. Chakiris says it was the vision of choreographer Jack Cole that made it a reality:

“All of that is Jack Cole and his contributions to movie musicals. It’s more than Gentleman Prefer Blondes, but certainly that is a strong, it’s a great number when you look at the whole thing.”

For his acting work on the movie version of West Side Story, in the role of Bernardo, the actor writes that filming the 1961 picture was a grueling experience. This year will mark 60 years since the release of the movie. George Chakiris describes the cast of that Oscar winning project as a family. He and co-star Rita Moreno built a lifelong friendship from working together on that film.

“I’ve been great friends and close friends with Rita for a very long time. I’m godfather to her daughter Fernanda. So, our friendship is, we’re kind of like family. In fact, I often like to refer to the cast, everybody in West Side Story as a West Side Story family. Because that’s exactly what it felt like. Most of us have retained our friendships over the years with each other and whenever possible, we see each other. … But again, my friendship, I don’t get to see Rita as often as I like to, she lives in Oakland, but when we get together, it’s like no time has passed. We laugh. We remember things. It’s a beautiful friendship and again, we’re part of each other’s lives because we shared that experience and because we remained friends all this time as well.”

The actor also shared his memories with us on another West Side Story castmate, actress Natalie Wood:

As the cast of West Side Story celebrates 60 years since making the famous picture, Hollywood powerhouse director Steven Spielberg is releasing a remake of the movie, slated for December of this year. George gives us his thoughts on the new version, that will include his 1961 co-star Rita Moreno:

“It will be wonderful to see what he’s done. I’m sure he’ll, the one thing I would say about him and his version I’ll say of West Side Story was that he had this extraordinary template to work from, which of course was the West Side Story that we were part of. So, he didn’t have to create anything new. He had something to work with that he could play with and change and I’m sure again that he’s done wonderful things with. But it was created for him a long time before that.”

When it comes to his post Oscar career, Mr. Chakiris has one regret and one piece of advice for anyone reading this. Due to giving power of attorney to a manager who represented him and other Hollywood stars, he lost his recording contract with Capitol Records, without having any say in the matter:

“I’ll tell any young person who asked me, is what did I, no matter what you do, don’t give power of attorney to anyone. They don’t need it. If they ask for it, be suspicious.”

George Chakiris had this to say, when asked what he wants fans to know about him:

“There’s a quote, Larry King, some while ago asked me and lots of other people for quotes for a book and I put my quote, I, actually it’s in the book and that quote is, ‘No matter how dark the moment, love and hope are always possible.’ And that was my quote and I think that’s really true. No matter how difficult things are, if we can get past that moment of things being difficult, you know, the sun comes out and we’re ok.”

The entire CYInterview with George Chakiris runs approximately 35 minutes. You will hear more stories about Marilyn Monroe, Elvis Presley, Dorothy Dandridge and Cole Porter, in addition to where he keeps his Oscar and much more about West Side Story.

Listen to the entire George Chakiris CYInterview on YouTube:

You can find more information and purchase a copy of George Chakiris’s book My West Side Story: A Memoir by clicking here.