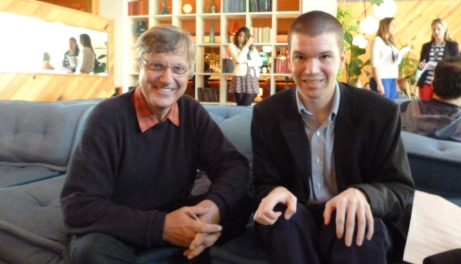 Oscar nominated director Lasse Hallstrom has made some highly acclaimed movies. It began for Lasse more than two decades ago at the Miami International Film Festival, when his Swedish movie, My Life as a Dog, gained traction. He would end up receiving a Best Director Oscar nomination for the film.

His movies, The Cider House Rules and Chocolat, went on to receive Best Picture nominations at the Academy Awards as well. Last month, Lasse returned to the Miami International Film Festival where he accepted the Career Achievement Tribute Award. Additionally, he brought with him his first Swedish movie since making My Life as a Dog. He brought The Hypnotist to screen at this year’s festivities.

We had a chance to sit down with the director and speak with him about The Hypnotist, as well as his career. You can read the highlights and listen to the entire CYInterview below:

Lasse admitted that the Miami International Film Festival is his favorite film festival because this is where it all began for him with My Life as a Dog. Reflecting on accepting this year’s Career Achievement Tribute Award, he said this:

“It’s a lovely full circle little thing. Since I think it’s really all started here it’s great to kind of at least close this circle of my life with my Swedish film. I haven’t made a Swedish film since My Life as a Dog so I find it ironic to be back with my next Swedish film here.”

He had this to say about that film, The Hypnotist, which he screened at this year’s festival:

“It was a story that had a great family drama within it and with a great part for my wife. It also had a thriller element that I was interested in experimenting with because I have never done a thriller before, so those two things and the possibility of going back to Sweden and Stockholm to spend time there. … It’s the joy of telling stories about real people, the interactions of real people and to show people emotions and situations that they can recognize and relate to.”

With a set of Academy Awards nominations, Lasse says he still has Oscar ambitions:

“Well, of course. I don’t mind that circus at all. I had a lot of fun, had, went on that circuit for like two, three years in a row. It’s a lot of hard work, the publicity part of it and I don’t envy too much those who do it year after year ‘cause it takes a big chunk of time out of your life, but I wouldn’t mind at all that type of recognition. I just need to make that type of movie again and hopefully I’ll get to do it this summer.”

In reflecting on his two Oscar nominated films, The Cider House Rules and Chocolat, he shared with us some memories of both movies:

“It’s a film I’m proud of [The Cider House Rules]. I love that whole year, getting to know John Irving and the producer Richard Gladstein and being able to condense a novel of 700 pages together with John Irving. It was just a lovely year of my life. I’m proud of the result. … That’s a lovely shooting memory [Chocolat]. We spent a couple of months in France in a little village called Flavigny-sur-Ozerain and had again the time of our lives right there.”

On what he wants people to take away from his work, Mr. Hallstrom offered this:

“I hope they’re entertained and maybe a little moved and that they recognize themselves in here and there.”

You can find more information about the Miami International Film Festival at their official website here.