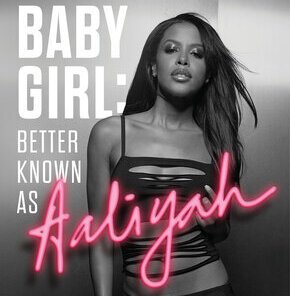 Next week will mark the 20th anniversary of the death of music superstar and actress Aaliyah. On August 25th, 2001, the singer died in a plane crash, along with eight others, in the Bahamas.

Today, a new biography on Aaliyah has been released through Atria Books, a division of Simon & Schuster. Journalist Kathy Iandoli has penned Baby Girl: Better Known As Aaliyah.

The book serves as an encyclopedic reference about the late R&B star, as it goes into great detail about many of the key events, professionally and personally, that made Aaliyah who she was. On why Ms. Iandoli wrote the book, the author had this to say:

“So, I could say it was several decades in the making. The actual putting together of the book was roughly a year and a half. But I just really, I’ve written about Aaliyah extensively throughout the 20 plus years that I’ve been a journalist.”

In the last few weeks, it was announced that some of Aaliyah’s music will finally be available to stream. This has been years in the making. The author shared her thoughts:

“To have that present and available, readily available, I think will put more respect on her name. That’s really what it boils down to.”

Aaliyah’s aunt is Gladys Knight. On what a young Aaliyah gained from performing with her aunt during a residency here in Las Vegas, the journalist offered this.

“When Aaliyah was able to perform, you know, as part of Gladys Knight’s Vegas residency, it was a very, it was a major turning point for Aaliyah who was not even a teenager yet, not even a preteen at that point. To be able to go on stage and to immediately learn how to shake her stage fright because the thing was when Aaliyah first got on that stage, she was frozen. … Being able to break out of that shell so early on really allowed for Aaliyah to develop into this full-fledged performer on top of being this musician, singer, songwriter, producer.”

Music stars Missy Elliott and Timbaland were two of the main people that helped Aaliyah’s music grow and reach wider audiences. Their producing work on her second album, One in a Million, is remembered to this day. The author said this about their relationship:

“That chunk in working with Timbaland and Missy, it’s kind of what set the tone for the rest of Aaliyah’s career, that sound, that combination of you know, R&B and soul with mixes of pop and hip hop and electronic music. Putting that altogether and creating just a whole other sound, that it started there. That was the genesis of that.”

Baby Girl: Better Known as Aaliyah goes in-depth about her death in the Bahamas on August 25th, 2001. It is a detailed account of the last days of the superstar, as well as the aftermath in wake of her death. For Kathy Iandoli, the big story surrounding Aaliyah’s death is this:

Our 30 plus minute CYInterview with Kathy Iandoli touches on many key events from Aaliyah’s career and life. It is well worth listening to.