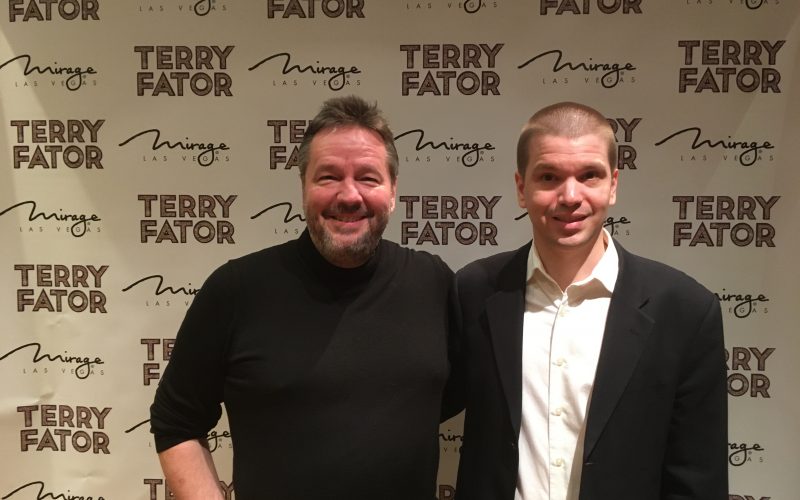 This past weekend, we paid a visit back to Terry Fator’s show at The Mirage on the Las Vegas Strip. You may recall our CYInterview with him [see here] after seeing his show in October. You can see our photo with him above from this past weekend. The singer, impressionist, ventriloquist and comedian is in the middle of his holiday show production running through December 30th at the Terry Fator Theatre.

Titled A Very Terry Christmas 2, The Sequel, the show stars Terry Fator impersonating/singing Nat King Cole’s Chestnuts Roasting on an Open Fire and John Legend’s So This is Christmas, among many other classic holiday songs.

As we told you earlier this month, some of the shows on the Las Vegas Strip, for the month of December, change up their productions and adopt a holiday theme for the season. Terry Fator’s show is one of those performances. Though a production of mostly Christmas music, Terry’s celebrity puppets including Elton John, David Bowie, Frank Sinatra, Dean Martin, Sammy Davis Jr. and Justin Bieber are showcased in much the same way during the America’s Got Talent star’s regular non-holiday show.

Those looking for a show of classic holiday music with some comedy in between, surely will be interested in seeing A Very Terry Christmas 2, The Sequel on the Las Vegas Strip at The Mirage this holiday season.

You can find more information about Terry Fator and purchase tickets to his show in Las Vegas clicking here.