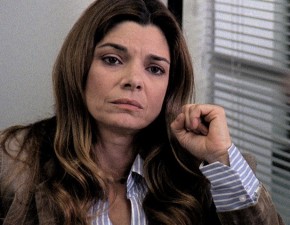 In her movie and television career, Laura San Giacomo’s time on screen has been memorable. The actress is probably best known for her roles in the movies Pretty Woman, Sex, Lies and Videotape and the TV shows Just Shoot Me and Saving Grace. Her latest role finds her playing a social worker in the movie Least Among Saints. It opens in theaters in New York and Los Angeles this coming weekend and goes wide the following weekend. The film is about the challenges a child without parents faces.

In this CYInterview, Ms. San Giacomo discusses Least Among Saints, in addition to discussing her acting career in general. You can read the highlights and listen to the entire CYInterview below:

In Least Among Saints, Laura plays a social worker who is tough on the outside but tender on the inside. The actress reflects on what she learned about social work while preparing for this role:

“Everyone starts with a, an ideal of helping people and helping kids and changing the world and through the course of seeing a reality and some pretty tragic human condition and also having to follow proper policy and procedure and being overwhelmed with the amount of people in need, it can create a certain amount of hardness I guess and also sometimes you need that distance from your emotion to be able to treat a person or see a situation with the right objectivity.”

Least Among Saints is about a boy whose mother dies and whose father is not around. It is a commentary on children who lack parents who can provide guidance and serve as role models. There appears to be a dearth of movies like this on today’s cinematic landscape. I asked Laura about this and she gave her thoughts:

“I have no answers to these really profound questions, if I did, I would be running things. Let me tell you, I would be changing some things. You know, I don’t know. It seems to be sort of a toss of the dice, what is really gonna hit the collective conscience, what is really gonna make that splash and sort of go from a little film into a big film that so many people want to see or are compelled to see or are compelled to watch that story. And it happens every once in a while and it’s just about the tenor and the feeling and the emotion and the mirror of the film just really hits people.

And I certainly hope that this film does that, but I just don’t know that I have any answers. I think that a lot of times people want to escape and there’s nothing wrong with that through comedy or through drama; we hold up a mirror so that people can see something of the human event, something of the human condition and sometimes it’s through comedy and sometimes it’s through drama and hopefully a little bit of both or whatever. But that’s all we can do is just keep practicing that storytelling.”

Many will recall Ms. San Giacomo’s role as Kit De Luca, playing alongside Julia Roberts as her best friend in the movie Pretty Woman. Looking back on the film more than 20 years later, Laura reflects on the controversy the movie was greeted with when it was released in 1990:

“Well, it always surprises me that it resonated so much with people. I mean that’s the thing is you just never know. I feel that it’s great to make people laugh; it’s great to make people think or feel something. We got a lot of slack about that being, movie about hookers and a lot of people spoke up about that and it made me feel really bad because everybody gets to you know have their story told and everyone has feelings and every human being has a story, everyone’s got a story and people didn’t like that it had a happy ending and they felt that it influenced some people in the world in a really bad way, but it also had a profound effect on people in a joyous way too that didn’t take it so seriously or as a actual representation of what society should be like.”

1990 was a big year for the now veteran actress. In addition to Pretty Woman, she had the female lead, opposite Tom Selleck, in Quigley Down Under. Laura thinks back about that project:

“Tom is really a, an old world gentleman. He was so gracious and such a gentleman and it was really a pleasure to be around him. He’s such a, he has such a love of all things horse and cowboy, that it’s really wonderful to be around anyone who is getting the chance to be immersed in one of their passions. So that was really fun actually.”

In comparing her lead role in Quigley Down Under and her supporting role in Pretty Woman, Laura says the projects were polar opposites:

“I mean, we were in the middle of a desert in Australia. So it was a very physical film in that way and then we were on Hollywood Boulevard in the middle of the night in high heel shoes. So, it, kind of polar opposites, kind of polar opposites in a very short time in my life to experience you know being on the opposite ends of the world and a different century and a different, totally different milieu. There was actually no comparison I think.”

In reflecting on her decades long career, the actress talks about what she’s learned along the way:

“I think that it’s a very interesting life and journey. We know that we’re getting into when we get into it and we’re young that it’s going to be a life that has a certain amount of challenges and gonna be kind of a gypsy life and there’s something kind of wonderful and adventurous about that and it’s going to be a life of self-examination and to create these bridges between yourself and these characters. It’s also going to be an examination of the human spirit and the human condition in all these stories that you read about all these different people and so that is a really lovely part of being an actor.

Least Among Saints opens in theaters October 12th in New York and Los Angeles and expands to a wide release on October 19th. You can find more information about the movie at the official site here.