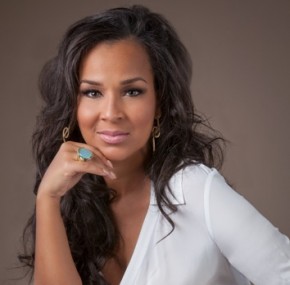 It has been almost 15 years since LisaRaye McCoy shared the screen with Jamie Foxx, the late Bernie Mac and the recently deceased Michael Clarke Duncan, in The Players Club. [RIP Bernie and Michael. You are truly missed.] For many, she will always be the sexy stripper, Diamond, in that cult film. The actress is also known for her role on the TV series All of Us and for currently starring in VH1’s Single Ladies.

Ms. McCoy has experienced her fair share of ups and downs in life. However, unlike others who sanitize the narrative of their lives – eliminating the bumps and bruises they have suffered – LisaRaye is refreshingly candid, readily admitting the mistakes she believes she has made and expressing a sincere desire to learn from them.

LisaRaye was formerly the First Lady of the small Caribbean island nation of the Turks and Caicos Islands. She was married to Prime Minister Michael Misick, that country’s leader at the time. Ms. McCoy says she was not in love with him. Their separation and subsequent divorce made for a host of allegations. Though her life might have seemed that of a princess, at least from the outside, she confides that it wasn’t all it was cracked up to be.

Away from the world of entertainment, LisaRaye has been spending some of her time being politically involved, as shown when she recently released an image demonstrating her support for President Obama, which reportedly received over one million views.

We had the chance to speak with the lovely Ms. McCoy for 25 intriguing minutes. You can read the highlights and listen to the CYInterview below:

Speaking candidly about mistakes she has made and what she has learned, LisaRaye sums herself up this way:

“I am one of those chicks that have gone through a lot and I am one of those chicks that can really honestly say to you, ‘Been there; done that.’ You can’t really tell me nothing if you ain’t been nowhere. If you ain’t done nothing and you haven’t been through any hardships, you can’t. Why are you telling me something? You don’t even know. You haven’t even felt it. When you go through a certain amount of pain in life, you know that you don’t want to go through it ever again. So you do whatever it takes not to feel that anymore.”

Like many performers who reach stardom, the actress admits she prioritized the wrong things. She worried about playing to a perception of who she thought people wanted her to be:

“It’s the build you up to tear you down kind of thing and so now you just have to be ok with self, because I was a victim of that. When I first did Players Club, I thought, oh I gotta look like Diamond to be recognized. I need long hair, I need the makeup, I need all that. And now I don’t need any of that. It’s no longer important to me. I’m prioritizing things totally different now, you know. And, but, it is because I lived through it. I didn’t step over it. I lived through it.”

The former First Lady of Turks and Caicos Islands recently released a photo demonstrating support for President Obama. The photo shows LisaRaye sitting on a desk, against a chalkboard. On the board, in writing it says numerous times, ‘I got Obama’s back.’ She talks about why she wanted the photo taken in a classroom setting.

“Education is my thing with kids. So I said, ‘I want to be a teacher and I want to sit in this classroom and I’m gonna say, this momma has Obama’s back.’ You know, ‘Why don’t you kind of thing?’ and urge the people to vote and exercise their right to vote and that’s gonna be my way of paying homage to the campaign, to Obama, to the presidency and to voting.”

Though she might be a supporter of President Obama, she has no problem standing up for her former Single Ladies costar, actress Stacey Dash. When Ms. Dash announced she was supporting Mitt Romney, it created a backlash – with lots of hateful words cast in Stacy’s direction. LisaRaye says it is wrong to believe any ethnic group must universally hold the same political beliefs:

“When I heard that and when I saw that you know, I’m a person who tries very hard not to judge because I don’t want to be judged. And so to me I was like, come on guys. You know that’s her opinion, that’s her right whoever she wants to vote for is her. I think the only reason why she got such a backlash is because she’s a black woman and you automatically you know think she’s supposed to vote for Obama because he’s black too. That’s not necessarily true. What her life has been has moved her to support Mitt Romney. We don’t know what she got going on. We don’t know if she’s a multimillionaire, billionaire and she don’t mind paying extra taxes. We don’t know that. … My hats off to whomever does whatever. … I don’t know why they came down so hard on her.”

As mentioned, LisaRaye was the First Lady of Turks and Caicos Islands, married to then Prime Minister Michael Misick. Though there were a variety of allegations surrounding their separation and divorce, Ms. McCoy has spoken, in the past, about finding positives during her time as First Lady of that Caribbean nation. However, even with the prestige of the position she held, she now looks back and wonders what she was thinking:

“Oh yeah. Oh damn. Hell yeah. I shouldn’t have ever gotten married you know. Because I married under God’s vows and it wasn’t true. I did not feel that way and so it was doomed from the beginning and although I justified it by saying, ‘Oh I knew why we got married. We knew what it was and it was our commitment to ourself.’ We still got married under those same vows in which people hold sacred and we did not. We were dating in our marriage and that was our agreement and although I had, was dating him before we agreed to get married and there was definitely a chemistry there and definitely a love there, but I wasn’t in love. I wasn’t.

We were dating to get to that point. That was backwards and I had to accept that and had to accept my responsibility in what it is I did. I know one damn thing, when I get ready to do it next time, I’m damn sure gonna do it right. … Sometimes I felt like a princess in a glass house because I left my career, I left my friends, I left my family and I went over there to support him and I had no one for me you know.”

LisaRaye, as the beautiful stripper Diamond, in The Player’s Club, had as a boss a strip club owner, played by the late Bernie Mac. She speaks about her talented friend, now gone:

“Back in Chicago there was a place called Cotton Club that even the models use to do fashion shows, the comedians use to do shows there and singers had a jazz band and a front and everything. And every time Bernie Mac would be doing the show you know, he would come up with that little Robin Harris voice, you know and he was like, ‘I’m gonna be a star one day. I’m going to be doing this some place else.’

And at the time I was modeling so we both wanted to do something. I just didn’t know at the time what I wanted to be and I came out to L.A. before he did and he called me and said, ‘I’m coming out there sis. I’m coming out there. I’m ready.’ And I was like, ‘Ok. Come on out.’ And he actually ended up doing The Kings of Comedy and then having his show and then we were actually on the same lot, which was CBS, together, and I would go over to his set and he’d be like, ‘I told you so. I told you.’ And I was like, ‘Yes. Look at us. We are in Hollywood.’”

3 Replies to “A McCoy Who Keeps it Real: Actress LisaRaye McCoy Opens Up About Life and Love; From Playing a Stripper, to Being a First Lady to Her Role in VH1’s Single Ladies, This Woman Has Had Experiences for More than One Lifetime”