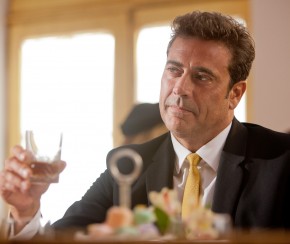 Actor Jeffery Dean Morgan is one of Hollywood’s most in demand actors. From his role in the TV show Grey’s Anatomy to action movies Watchmen and The Losers, Mr. Morgan is building an acting portfolio that will likely lead to wider recognition and further opportunities.

Currently Mr. Morgan plays a 1950s Miami hotel owner – it’s the lead role – in Magic City, on the TV Channel Starz. The show takes you back to Miami Beach during a time when major stars like Frank Sinatra, the Kennedys and mobsters were part of the city’s culture. Below you can read the highlights or listen to the entire CYInterview with the Hollywood veteran:

Focusing on preparing for the lead role as the owner of a 1950s hotel called the Miramar Playa, Jeffrey talks about the inspirations for the TV series Magic City:

“A lot of it was on the page. I think the creator and script writer Mitch Glazer who you know created this world, it was a world that he grew up in. He grew up in Miami and was a kid at about the time the show is going on and a lot of the stories he was there for and now writes about them, but so much was on the page and then I did a little bit of kind of research into some of the bigger hotel owners of the day, especially in Miami.

In particular there was a guy named Ben Novak who owned and ran the Fontainebleau Hotel in the 1950s through like the 80s in Miami. I did a little bit of research into him, but you know a lot of it was on the page and then as an actor I kind of instinctually I think bring what I can to that role, but you know it was a crazy time, it was a little bit of wild, wild west happening in Miami Beach in the 1950s especially with Cuba being overthrown and the Rat Pack playing in the background. There was so much stuff going on and a lot of it taking place in the lobbies of these hotels which is kind of the story that we’re telling.”

With his career on the rise in both movies and television, the 46 year old actor is looking forward to two movies hitting theaters this year. He’s in the upcoming Jane Fonda movie Peace, Love & Misunderstanding, coming to theaters next month, and The Possession with Kyra Sedgwick slated for August. He sums up how his career has played out so far:

“You know my career has been such a weird, odd career. I’ve been doing this for 25 years and up until you know six, seven years ago no one had ever heard of me and I’ve just kind of been plugging along and you know hoping that something would hit and so when I think my career sort of took off, you know seven years ago because of a couple things kind of happened simultaneously Grey’s Anatomy and Supernatural in particular, I think I was so, I felt so lucky and so blessed to have that sort of moment in time and the momentum has obviously carried me into what I’m doing now and a lot of stuff in between and you know this business, it’s a crazy business and a lot of the time the word crazy doesn’t fit it. I’d say it’s ridiculous and stupid. That being said, I love it.”

Some think Jeffrey Dean Morgan might be Hollywood’s next big action star. So what are his thoughts on that?

“I don’t know. I went through a phase after Watchmen where I did you know a couple back to back action movies and they’re great, I love them. But I also want to do other things. There’s a couple of things going against me for the action start thing in that when you get older it’s a lot harder to bounce back off that pavement when you take a hit. Stunts get a little bit more difficult. I just had knee surgery like three weeks ago. You know these are all injuries that I’m starting to feel. I just turned 46 so you know being a big action star is a hard on your body kind of deal. So you know we’ll see. By no means am I out of the action realm. I’m looking at a couple action movies right now. I just don’t think that’s all I want to do.”

If you put Jeffrey next to Oscar winning actor Javier Bardem, you could say at the very least they were related. Mr. Morgan says he gets mistaken Mr. Bardem all the time, but sometimes the Oscar winner gets mistaken for him:

“It use to happen a lot more sort of right when I guess started being recognized at all. I got Javier a lot. Now it happens less, but it certainly happens quite a bit. It’s funny, I was doing press for Magic City and doing phone interviews much like I’m doing here with you and I got on the phone with somebody and I don’t remember what it was for, but they had just interviewed Javier like the day before and Javier told a story much like the stories I tell of people coming up to me and thinking I’m him and he told a story about you know being at the airport with his wife and somebody coming up and insisting that he was Jeffrey Dean Morgan and so I was rather amused he gets the same thing I get. But yeah it happens quite a bit. I get Javier and I get Robert Downey every now and again too. It’s funny.”

Jeffrey Dean Morgan stars in the TV series Magic City airing on Starz. You can find more information about the entire TV series at www.starz.com/originals/MagicCity