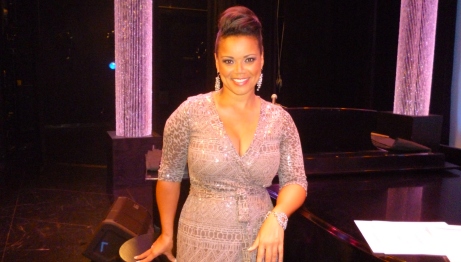 A few weeks ago, at the world debut of her cabaret show at the Aventura Arts & Cultural Center in South Florida, Kimberley Locke displayed her comedic talents, regaled us with stories of celebrities and charmed us with gifted singing. Only a few months prior, we spent time with Kimberley at the South Beach nightclub Score, where she entertained a lively crowd [see here].

This evening, however, was more personal for the season two American Idol alum. In between songs, Kimberley shared stories about how she was a late bloomer when it came to singing, her encounters with Donna Summer and Whitney Houston and how she and her former American Idol colleagues used to fight over song choices. In the 90 minute show, the Nashville native put her bountiful talents on display, made us laugh and received much applause.

Kimberley Locke’s My American Idols is a feel good variety show, with something for everyone. It’s as entertaining as it is enlightening. After the debut of the show, we went onstage and CYInterviewed Kimberley and her musical director Rick Leonard. You can read the highlights and listen to the entire CYInterview below:

Listen to the entire Kimberley Locke and Rick Leonard CYInterview:

After finishing her debut, Kimberley shared this:

“Check that off my list. The first one’s over. You know the first show, you know it’s the beginning of it all and we just, you know, are starting out. So it’s nice to get the first one under your belt, see how the audience responds, see how everything feels onstage and it was great. I thought it was great.”

For years, musical director Rick Leonard had been talking with Kimberley about performing a cabaret show. Mr. Leonard is also a singer and pianist who has performed in various venues in New York City over the last 25 years, including Tavern on the Green, The Plaza Hotel and The Firebird. Rick reflected on what working on this project means to him and what it is like experiencing Kimberley’s musical growth:

“It’s way up there because I get to be in a creative process with a wonderful artist and I love being able to work on this together and then be able to sit back and watch her go out and make it happen. It’s a very exciting thing for a musical director or any director to be able to experience. … She’s a quick study and she picks up things and she’s wonderful on her input and her influence on the show is tremendous. So, it’s not something that I’m doing and giving to her. We’re doing it collaboratively.”

The show is very much what you might see in a Las Vegas venue. I asked Kimberley what she thought of bringing the cabaret show to Sin City:

“I mean Chris, from your mouth to God’s ears, to park it in Vegas for a little while, I don’t think Rick would give me any resistance on that. You know one of the reasons I wanted to do this show was because I want people to see my personality and you know I think I’m funny. … You know, I like to tell stories and I like to be connected with my audience. I like the intimate theater and I can see the people’s faces and tell them personal stories. So everybody who was here tonight are gonna leave, they left knowing something about me they didn’t know about me before. You learned something about me too I’m sure.”

One of the stories in Ms. Locke’s show is about recognizing a familiar face on plane but not knowing who it was. After getting off the flight and going to baggage claim, Kimberley told the woman she thought she looked familiar but could not place her. It turned out to be Donna Summer:

“That’s horrible right. I mean, it was, I was literally on the plane and it just was not registering in my mind. But that happens when you see people out of context. You don’t expect to see Donna Summer on a plane, you know, going to Nashville of all places. I didn’t expect it, but she was very gracious and it was just one of those moments that I’ll never forget.”

Kimberley’s performance in Aventura celebrated a decade working in the music industry, when many artists’ careers launched via reality TV had not enjoyed the same staying power. She has continued to perform across the United States and the world, including a recent stop in the Dominican Republic. I asked her what it meant to still have it and keep the dream going:

“I think that having you say that to me, it makes me feel very proud of where I am and what I’ve done and what I’m doing and where I’m going and if you recognize that then there are other people out there who recognize that as well and it makes me feel very good. You know I am a hard worker. You might be able to out sing me, but you are not gonna work as hard as me. And I’m a very hard worker and I like to take risk and I like to push myself outside of the box and that’s what this is all about. …

I am gonna jump into it after this first show now that I know I can do this; you know the sky’s the limit right now and I want to share that, like, with other artists out there. Go out and make your space, find your space.”

Currently, Kimberley has released her latest seasonal track, Silver Bells. Ms. Locke is no stranger to the Christmas song genre. She has three number one songs including Jingle Bells, Up on the House Top and Frosty the Snowman. All three songs went to number one on Billboards Adult Contemporary chart. She tells us what makes a good Christmas song:

“The thing about Christmas is that we have so many great, traditional, standard Christmas songs that people love hearing those same songs over and over again. You know, what makes a good Christmas song is something that people can sing along to and something that resonates with everybody. You know it makes people feel good because the Christmas season no matter what is going on in people’s lives, they still put up a tree. If they can’t afford 50 gifts, they still buy one gift and if they can’t buy any gift they still want to be with their friends and their family. So, people want to be uplifted during the holidays. So, if you can come up with a song that uplifts the spirit, regardless of what’s going on around you, then you’re gonna have a hit song.”

A special thanks goes out to artistic director David Sexton who collaborated on My American Idols with Kimberley Locke and Rick Leonard. We thank David for his work that evening on behalf of CYInterview.

You can find more information about Score Nightclub at their official site here.

3 Replies to “A Lock on Entertaining: Singer Kimberley Locke Wows ‘Em at Aventura”