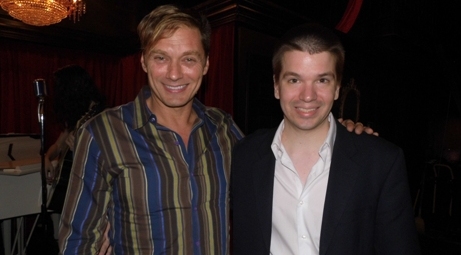 Edison Farrow, a long time promoter, has opened his first venue. Along with partner Ed de Caso, Mr. Farrow has brought his take on musical evening entertainment to Miami Beach. With the opening of The Cabaret South Beach, in the middle of December, the public has come to know a group of singers, who happen to be the venue’s staff. One minute, they are bartenders and servers, the next they are on stage singing and covering the likes of Adele and Barbra Streisand.

Located between Washington Avenue and Collins Avenue, The Cabaret South Beach offers entertainment for the audience, who might not be interested in the typical club scene.

We had a chance to speak with Edison, who also served as producer for one of the club’s opening nights, about what to expect from his new place in South Beach.

Talking about his inspirations for The Cabaret South Beach, Edison tells us this:

“I grew up in New York and there were a lot of piano bars and cabarets there. I use to go to them all the time and I always felt that there was a void of that here. So for many years I’ve thought about opening up a Cabaret on South Beach and it finally happened. … I really wanted to create a place that just had a whole Miami twist. I’ve been to many different performance venues all around and I just wanted to bring a unique style to this one and I really think we’ve achieved that. … There’s so much talent here and they’re really very few venues for anyone to showcase and so this really gives them a great opportunity to do that.”

The performers at The Cabaret South Beach are also its bartenders and servers. During the evening, they take turns singing, accompanied by a piano player. Talking about this concept, the veteran nightlife promoter related this:

“We have piano players every night, but all of our staff, all the servers, all the bartenders are all singers and performers, extremely talented and they put on shows for you every night. So it’s very unique. … It’s a great platform for everyone to be working, earning money, but at the same time showcasing. … They do it in New York in some bars, but we had a lot of extra elements here that a lot of times we’ll actually come up with, multiple instruments and we’ve had also burlesque performers and even last night we had an aerialist hanging from the ceiling.”

From Sandra Bernhard to Chita Rivera, Edison has worked with many acts over the years. Sharing some of those memories, the producer offered the following:

“That was the first theater event I produced [Sandra Bernhard]. I brought Sandra Bernhard with a band down and we sold out four shows at the Colony Theater and I also brought, that was a really great experience, but I also brought Chita Rivera to the [Jackie] Gleason Theater and John Waters for a one man show at the Lincoln Theatre. I’ve brought a lot of people down. It’s been very, very interesting.”

Mr. Farrow believes The Cabaret South Beach was a good idea waiting to happen. He says once the word gets out about the place, talent scouts will come to look at the performers:

“Someone’s just gotta do it. For some reason nobody’s really just done that, but I think there’s really a need for it and I think people will come if you do it right. … We have such an amazing level of talent. I think once the word gets out there of how amazing our talent is people will come scouting people here and if the record company steals them away I will be very proud.”

You can find out more about The Cabaret South Beach at their site here.

One Reply to “A Light Bulb Went Off For This Promoter: Edison Farrow Opens The Cabaret South Beach; Club Seeks to Brighten Miami Beach Nightlife”