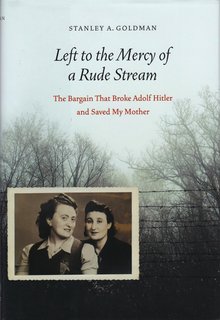 “People will do anything, no matter how absurd, in order to avoid facing their own souls. One does not become enlightened by imagining figures of light, but by making the darkness conscious.”

When Chris Yandek and I had the opportunity to speak with Professor Stanley A. Goldman about his book, Left to the Mercy of a Rude Stream: The Bargain That Broke Adolf Hitler and Saved My Mother, it was Carl Jung’s words, quoted above, that rang in the back of my mind.

Professor Goldman – a man of great accomplishment: lawyer, law professor, journalist, media figure and author – is a second generation survivor of the Holocaust, the Hitler/Nazi led program of ridding Germany, Europe and ultimately the world of the Jewish people by systematically murdering them.

Second generation Holocaust survivors are the children of those who made it out of the Holocaust alive. They did not live through the Nazi atrocities but know them all too well. They and their children, and their children’s children, bear the unbearable pain of knowing their parents’ and grandparents’ and great-grandparents’ plight. They know of too many family members who were not fortunate enough to escape the Nazi’s and their helpers. They suffer by dint of their knowledge, yet they are an invaluable resource to the world because of that knowledge.

During the Holocaust, which took place in Europe between 1941 and 1945, six million Jews were killed, equating to roughly 40% of the world’s Jewish population at that time. If we were, heaven forbid, talking about the same program of genocide being applied to the population of the United States today, that would be the equivalent of the murdering of roughly 131 million people: men, women and children, for nothing more than being American.

The genocide of the Jewish people in Europe, at the hands of the Nazis and their willing collaborators, was premeditated, planned, systematic, aided by the technology of the time and supported by a specific ideology of hate, which was embraced by many.

The focus on the destruction of the Jewish people flowed directly from the Nazi authored Final Solution to the Jewish Question, a specific plan to murder as many Jewish people as possible, with the ultimate goal of annihilating all Jewish people in the world.

Professor Goldman’s book is a must read, especially today when the politics of scapegoating and polarization have come back into vogue and have been seemingly accepted by individuals across the political spectrum.

The book deals with not only the first hand victims of the Holocaust, but those of the second generation, the children of the survivors and the psychological and emotional devastation wrought upon them.

Woven into the book, and yielding its title, is the story of how Stanley Goldman’s mother narrowly escaped the fate of many of her fellow Jewish people and instead of ending up gassed and cremated, made into soap and lampshades – yes the remains of Jewish people were used to craft everyday household items – she was spared as part of a Nazi leadership propaganda effort to attempt to cover up their horrific crimes, at the end of the war.

Left to the Mercy of a Rude Stream should be required reading in every school and university. It should be read by every person aspiring to help the world evolve and grow into a better and more humane place.

We must never forget the barbarity that humankind is capable of. We must inoculate ourselves to this dark side of human nature through education, study, robust memories and responsible activism. And we must stand shoulder to shoulder against the demagogues who would have us turn on our fellow human beings.

You can listen to this most important CYInterview with Stanley A. Goldman by clicking the link below:

Listen to the entire Stanley A. Goldman CYInterview:

You can learn find more information and purchase a copy of Professor and Attorney Stanley A. Goldman’s Book Left to the Mercy of a Rude Stream: The Bargain That Broke Adolf Hitler and Saved My Mother clicking here .

One Reply to “A CYInterview with Stanley A. Goldman, Author of Left to the Mercy of a Rude Stream: The Bargain That Broke Adolf Hitler and Saved My Mother”