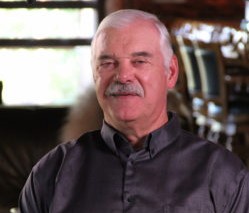 Earlier this month, the Philadelphia Eagles lost to the Washington Redskins. The Eagles’ loss guaranteed that for another season, the 1972 Miami Dolphins would remain the only NFL team to go undefeated. That Dolphins team won all their games during both the regular season and the postseason, culminating with their Super Bowl victory on January 14th, 1973 in Super Bowl VII. This year marks the 50th anniversary of the 17-0 Miami Dolphins.

This year, on October 23rd, at Hard Rock Stadium in South Florida, the 1972 Dolphins were honored on NBC’s Sunday Night Football, prior to the Miami Dolphins taking on the Pittsburgh Steelers. 1972 Dolphins fullback and NFL Hall of Famer Larry Csonka was on the field, with other members of that Dolphins squad, for the game’s coin toss.

Mr. Csonka, a fullback, played a key role on the 1972 Miami Dolphins team, led by the winningest coach in NFL history, Don Shula. Coach Shula died in 2020, at the age of 90. Recently, Larry joined us on CYInterview to talk about his new book, titled Head On: A Memoir. He says the passing of Coach Shula inspired him to write this book:

“I think I had a moment that caught me to start really considering writing a memoir when Coach Shula passed. Just that was kind of a wakeup call for the fact that I’m getting older, if we’re gonna write a memoir, we need to do it. So, that’s kind of what Audrey said to me and I followed suit and I think that moment in time was a realization that the past is here.”

On what Coach Don Shula would think of his new book, he said this:

“I think he’d like it. I think it, I stayed as much with reality as I thought as I possibly could and he was that kind of coach, he’d like to deal with what we know, what are the facts. And you know, he was the kind of coach when you played for, if he knew you were into it and sincere as he was and that’s quite a mouthful to say as sincere as he was, I don’t know if any of us got to be that sincere.”

On why the 1972 Miami Dolphins went undefeated, Larry said it was a total team effort:

“There were different people that stepped forward in different instances in different games that made the difference in us obtaining and securing that undefeated season. So, it was a total team effort and that’s what makes it such a great thing to be a part of.”

A week before the Miami Dolphins defeated the Washington Redskins 14-7 in Super VII, clinching their undefeated season, coach Don Shula flew to the site of the big game, the Los Angeles Memorial Coliseum, to judge how the sun would impact the Dolphins in the Super Bowl the following weekend. The ‘72 Dolphins fullback says the game was intense:

“To describe what happened in that game, to not be up for that game would have been impossible. You couldn’t be within five foot of him without feeling the radiant enthusiasm for winning that game. And he formed, the intensity that we felt in that locker room prior to starting that game was about the most I’ve ever experienced in any kind of athletic contest ever.”

If a person has goals, dreams or ambitions, what can someone learn from the 1972 Miami Dolphins?

“In a word, teamwork. The ability to count on each other, to operate in almost a military fashion where you keep your end held up. In other words, to the intensity, the sincerity and intensity to show up and do what you’re supposed to do. I can’t stress that enough. I think teamwork is the essence.”

Larry Csonka also talked about his Pro Football Hall of Fame induction, NFL great Jim Brown who played at Syracuse before he did, and his experiences in Alaska, among other topics.

Listen to the entire Larry Csonka CYInterview on YouTube:

You can find more information about Larry Csonka’s new book Head On: A Memoir by clicking here.

You can find Larry Csonka on Instagram by clicking here.

You can find Larry Csonka on Facebook by clicking here.

You can find Larry Csonka on Twitter by clicking here.