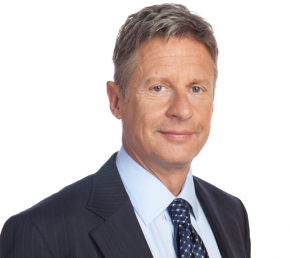 For those concerned about America’s debt and deficit, former Republican, two term, New Mexico Governor Gary Johnson has a plan to bring fiscal responsibility to the United States, in addition to standing up for civil liberties. Mr. Johnson, who ran for the Republican nomination for president, yet did not get much exposure, is currently running for president as the Libertarian Party nominee. On Election Day, he will be on the ballot in all 50 states.

As New Mexico’s governor from 1995 to 2003, Mr. Johnson vetoed hundreds of spending bills leaving New Mexico with a one billion dollar surplus upon leaving office. In addition to being fiscally responsible, Mr. Johnson is a social liberal who believes the government should stay out of our personal lives. Additionally, he wants to end the war in Afghanistan and bring our troops home.

With a 16 trillion dollar debt and the United States Government borrowing close to half the money it needs to cover annual expenses, action will have to be taken to protect the fiscal solvency and economic sustainability of the nation.

Perhaps, Gary Johnson is one of but a few public officials who understand the inherent, limited abilities of government. And, maybe, it is this understanding that can help create a national dialog on how the U.S. might best deal with the economic challenges it faces.

Below you can read and listen to the highlights of our entire CYInterview. Featured columnist Jay Bildstein joins me in speaking with former Governor Gary Johnson, candidate for President of United States:

Listen to the entire interview with Governor Gary Johnson:

A few weeks ago, Ron Paul announced that he would stop campaigning in the states remaining to be contested in the Republican presidential primaries, but that he would continue his quest for delegates. It is a virtual certainty that Mr. Paul will not win the Republican nomination for president. As far as alternatives, Gary Johnson’s fiscal responsibility and social liberality seem closest to Congressman Paul’s views.

Gary Johnson hopes Ron Paul’s supporters will look at him more closely and will vote for him in the general election:

“You’re not handicapping yourself if you don’t have Ron Paul to vote for and that alternative would be me you know having won the Libertarian nomination for President, you know let’s balance the budget, let’s end the wars in Afghanistan, let’s bring the troops home. There’s a difference. There is a third choice.”

Responding to Jay’s three part plan – which he has been introducing to a variety of individuals along the political spectrum – that members of Congress, the president and vice president take a 50 percent pay cut and give up their rich after office benefits, accept a lifetime ban on lobbying and that members of Congress be subject to term limits, the candidate for U.S. President and former Governor of New Mexico gave his thoughts on it and offered his own solutions as well:

Governor Johnson further elaborates on his plan to enact a 43 percent reduction in government spending. He believes a monetary collapse is on the horizon if we don’t balance the budget now and cut federal spending:

“When I talk about a 43 percent reduction in federal spending, I don’t think what people are considering is that a 43 percent reduction in Medicare spending is a whole better than not having any health care for those over 65 at all and that’s the alternative. I do believe that it’s past midnight and that we’re going to suffer a monetary collapse as a result of borrowing and spending money to the tune of 43 cents out of every dollar that we spend. That’s not sustainable and it’s here and it’s now and it has to be dealt with and the first thing on the list of dealing with this is to slash federal spending.

I am promising to submit a balanced budget to Congress in the year 2013. I don’t think any of the other two candidates are talking remotely close to doing that…What I’m proposing needs to be done is that we balance the budget now. Does that do away with what may end up to be a government collapse? No. Because we still have the 16 trillion dollars in debt that we have to deal with and depending on the interest rate that has to be paid on that, you could find ourselves printing up money if we weren’t taking on any new debt at all. But the first step has to be to slash spending

I am promising to submit a balanced budget to Congress in the year 2013. I think spending will be lower with that promise kept and the promise kept to veto any legislation where expenses exceed revenue. I’m willing to pose that spending will be lower in that scenario than any other possible scenario and that if we don’t do this, the alternative is ala Russia, monetary collapse. The money that we have one day is just not worth anything tomorrow…The only way we stand a chance against it not happening [monetary collapse] is to slash spending now.”

Commenting on his principal opponents for the presidency, President Barack Obama and former Massachusetts Governor Mitt Romney, the Libertarian nominee for president says this:

“Who’s gonna slash spending? Obama or Romney? I don’t think so. Who’s gonna get us out of Afghanistan? Who’s gonna bring the troops home? Who’s gonna end the war on drugs? Both of them, how about repealing the Patriot Act? Both of them support The Patriot Act. Both of them want to bomb Iran. Let’s not bomb Iran…You can’t balance the federal budget if you’re not going to cut Medicaid and Medicare and military spending, the big three…But you can’t balance the budget without significantly cutting entitlement spending. And if we don’t cut entitlement spending, we’re gonna be left with nothing. The alternative is nothing as opposed to a system that I think can be implemented that will genuinely take care of those in need.”

In national polls Gary Johnson stands at around seven percent versus Barack Obama and Mitt Romney. To qualify for the presidential debates, Mr. Johnson will have to be polling at 15 percent by fall. Might Gary Johnson take to the platform like Ross Perot did in 1992, strongly influencing the tone of the debate? Only time will tell. Mr. Johnson could have great impact on this year’s presidential elections, particularly if he is able to participate in those debates. The Governor tells us his strategy to make this happen:

“I think there will be recognition, growing recognition of being on the ballot in all 50 states that there are only gonna be three parties that are going to accomplish that. I don’t think Ron Paul’s candidacy is gonna be successful and for the most part Ron Paul is talking about these same issues and talking about the solutions that go along with the problems, but I don’t think he’s gonna win the Republican nomination. So that’s another kind of key event. Where does all Ron Paul’s support go when that candidacy comes to an end? Well, I think that the Libertarian ticket, me, offers an alternative that’s not a fallback position. It’s not a handicapped decision. It’s a reload if you will.”

Looking at America’s unfunded liabilities, reported to be approximately $56 trillion, in addition to a $16 trillion dollar national debt, one wonders why Democrats and Republicans alike are not speaking out and dealing with this enormous fiscal challenge with greater urgency. Governor Johnson does not understand why they both continue to kick the can down the road:

“I don’t understand the, I don’t understand kicking it down the road because it’s just, there’s not that much room left. You guys recognize that you know so much talk of late has been given of Greece. Well Greece is at 160 percent of Gross National Product. We’re six to eight years away from statistically being in that same place. Now Greece can’t print money. We can. So our outcome is going to be that the dollars we have are so inflated that they virtually become valueless…Because of the change in the way we compute inflation, that really the inflation that we have today rivals that of Jimmy Carter because you know they exclude energy and food prices.”

“Ultimately it could lead to legislation, but it’s certainly not, it’s not gonna happen tomorrow given the 40 plus states have said they will not recognize same sex marriage. I think this is a constitutionally guaranteed right and that this will end up being a Supreme Court decision that will be implemented federally, just like civil rights. Look, if civil rights legislation didn’t pass, would we still have segregated public bathrooms in the South? I think so…I believe it is [disingenuous] yet in the same breathe it’s not negative, it’s positive, but it’s removed from actually making it happen.”

With his belief that government has no place in the private lives of Americans and that we need a much smaller government than we currently have, along with fiscal responsibility, Gary Johnson tells us why all Americans should seriously consider voting him. He says he offers the best of both the Republicans and Democrats:

“The notion that Libertarian Party maybe takes the best from both parties, that would be civil liberties from Democrats and fiscal responsibility from Republicans. And by the way, I don’t think either one of those parties does well even in the areas that they’re supposed to do well, but imagine a Libertarian president challenging Congress to repeal The Patriot Act, challenging Congress to end the drug war and I’m talking about the Democrats, challenging them on marriage equality. And then a Libertarian president challenging Republicans to genuinely slash spending, to genuinely shrink government because if we don’t, we’re not gonna have any at all.”

You can find out everything about Libertarian Candidate for President Gary Johnson at www.garyjohnson2012.com