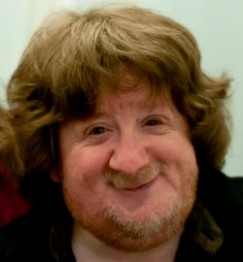 In the 1970s, child star Mason Reese gained national attention for his work in commercials. Arguably, the most famous of those was the one he did for Underwood Deviled Ham, where he spoke that immortal, inverted word, “borgasmord.”

His work garnered him the cover of TV Guide for the December 29th 1973 to January 4th 1974 issue. Mason told us that it was the first time in TV Guide’s history that someone made the cover who was known for commercials, but had never been in a scripted TV show or movie.

During his career in commercials, The Mike Douglas Show came a calling and the young Mason Reese’s star rose to new heights. The show’s producers liked his work so much they ended up having him on the well-known talkfest more than 32 times.

By the time he hit his teenage years, Mason says the phone calls and jobs slowed down. Eventually, he turned his attention to the New York City nightlife and restaurant industry. The former wunderkind currently has one spot, called the Destination Bar and Grille, on the lower East Side of Manhattan.

Mason, who is 49 years old, is now working on his first acting project in 31 years. Having raised funds via Kick Starter, Mr. Reese’s production company, Borgasmord Productions, raised over $38,000 to film a TV pilot for a show called Life Interrupted. The cast includes Dawn Wells who played Mary Ann on Gilligan’s Island, Erin Murphy who played Tabitha on Bewitched, Alison Arngrim who played Nellie Oleson on Little House on the Prairie, Michael Learned who played Oliva Walton on The Waltons and Robbie Rist who played Cousin Oliver on The Brady Bunch, among others.

In this CYInterview, Mason reflects back on his career and talks about getting back into acting after more than 30 years. You can read the highlights and listen to our entire conversation below:

Mason rose to fame in the 1970s, owing to his commercials and appearances on the Mike Douglas Show. It was a time before the Internet and so much of the media saturation we are now accustomed to. Talking about what it meant to be a child star in the 1970s, he told us this:

“Growing up in that decade and that part of the world, living in New York City, which is where I grew up, man those were some really exciting times, you know, for me as a young actor in the business. I started when I was four, but kind of made it big when I was seven, which is kind of a surreal feeling to a great extent and now looking back on it all these years later, it’s still a very surreal kind of a feeling for me knowing that literally on any given day millions and millions and millions of people would see me in their living rooms and of course the affect of that and people stopping me on the street and asking for autographs and all kinds of other crazy, unusual requests was really a very exciting time for me back then. … There really weren’t many people who obtained the level of celebrity that I did based solely on commercials. … Commercials really are what catapulted me to where, ultimately, I ended up. That’s pretty unusual in it of itself.”

Focusing on his TV Guide cover back in the 1970s, Mason has these memories:

“I can tell you that, a little statistic that and I don’t know if this is still the case, but at least up until I was on the cover of TV Guide, no one had appeared on the cover of TV Guide that was not a movie star or an actor in an ongoing television series, a soap opera, a sitcom, you know, a one hour drama episodic or something like that. They were all working actors who had built, you know, a career and it didn’t launch their career. It was part of their career and, you know, they were on some type of an active television show or the star of a major motion picture. No one had done TV Guide up until at least my point that really did not fit any of those categories.”

His commercials led to an appearance on the Dick Cavett Show, but it would be the Mike Douglas Show where his celebrity would grow. Mr. Douglas and his producers saw something special in seven year old Mason Reese. It led to them having him back on the show more than 30 times. Sharing some stories about those experiences, this is what he told us:

“Originally I went on and I just did a segment as a guest and Eva Gabor was the co-host at the time for the week because Mike liked, you know, Mike liked to have those co-hosts that did all five, you know, shows with him and it went so well and I was precocious and funny and Mike just took a real liking to me that literally before I left the studio to go back to the hotel, the head talent booker approached my mother and father and said, ‘We would like to have Mason come back and do an entire week with him.’

Well, to be perfectly honest with you, my parents literally shit their pants because, you know, controlling a seven year old for seven or eight minutes is hard enough. You know, then to control him for 90 minutes, five days, you know, my parents literally didn’t know if I would behave myself, if I was able to censor myself and not do, you know, horrifically bad things in front of a live audience you know.

But, you know, they talked to me about it and I thought it was a great idea at that age and I wanted to do it. So literally three or four weeks later, we were back in Philadelphia, this is where Mike shot his show for most of his career and I was co-hosting for a week. Obviously the fan mail was, you know, off the hook and then they asked me to come back for a second week and ultimately for a third week. And I ended up doing multiple guest appearances, you know, in between those weeks. I think the total I did was if my math is correct is I think I appeared on the Douglas show 32 times. I think that’s what it was, 32 appearances on the Mike Douglas Show and that’s pretty crazy too.”

It was the Underwood Deviled Ham commercial that put him on the map. He tells us about his experience filming that memorable commercial:

“Obviously we all know the real word is, you know, smorgasbord. We all know that. And I remember that the guy who was the director, who was working with the ad agent, his name was Andy Doyle. It was Andy’s job to kind of wrangle me, you know, and get me to do what they needed right. So I did not want to mispronounce the word smorgasbord because I knew the word and I wanted America to know that I was a smart kid and I knew what the real word was. So, but Andy was determined that I was going to mispronounce it. One way hook or by crook he was gonna get me to do it.

So he took a yellow pad of paper and he wrote down 20 or 30 different words that sounded like smorgasbord. And I read threw them and I looked at the word borgasmord and I said, ‘I like this one.’ And Andy looked at me in this infinite wisdom and said, ‘Mason, you are not gonna believe this.’ I said, ‘What’s that?’ He said, ‘Borgasmord is smorgasbord in Swedish.’ Which it’s not. It’s a total lie. And I looked up at him and because I felt smarter than I really was, that’s the word we went with. So it really was not me, it wasn’t my imagination, it wasn’t my brilliance that came up with that. It really was this guy Andy Doyle who was a director working for the ad agency. But that really was the word that kinda, you know, helped to catapult me to a whole different level.”

Just a few days ago, Mason start shooting his first acting project in 31 years. It is a TV pilot for a proposed series called Life Interrupted. Through Kick Starter, he raised $38,000 to produce the pilot. He is hoping the show gets picked up by a network. Telling us a little bit about the show and cast, Mason shared this:

“I am excited about it. As you said we have Dawn Wells [Gilligan’s Island], Erin Murphy [Bewitched], we also have Alison Armgrim, you know, who played Nellie, Nasty Nellie on Little House on the Prairie. She plays my ex-wife. And we have Michael Learned who was, you know, the mom on The Waltons, as well as a Tony nominated actress. She plays Erin Murphy’s mother. And we also have a couple of really great, young up and coming actors that are beautiful, and talented and smart. Oh, we also have Robbie Rist who was Cousin Oliver on The Brady Bunch. … We got some really fantastic, classic sitcom stars in the show. And I have a feeling that once we sell the show, a lot more will come out of the woodwork, you know, that would love to be involved in a project like this. … I have no doubt whatsoever that once we sell the show and actually go into production on the show, that every talk show in the world is gonna want to have us come on and talk about it.”

As far as what people should know about his life today, he tells us about why he was different than most child stars and how that shaped him as he turns 50 this year:

“Wow! Good question. It’s such a simple question, but yet not simple at all. Look, you know, it’s, I want people to know first of all, the one thing we haven’t talked about, you know, a lot of child stars, you know, get a bad rap from some of the things that they’ve done. Now we’re not gonna get into names on that one because we all know who the offenders are. You know, we all know who’s been in the public eye doing really bad, stupid things. But I’m about to turn 50 in April. I have never had a drink in my life, I have never smoked a cigarette and the only drugs I’ve ever done were after I broke my leg and I was in the hospital for a while. So literally, you know, it’s, I’m not the normal guy.

You know, I’m kind of the exception to the rule so to speak. Although I think that’s a little bit overstated. Out of the millions of child actors out there, it’s only a small handful that have gone down a bad road. But, that being said, I just want people to know that ultimately I am a pretty normal guy, you know, not living a normal life necessarily, but you know, I’m definitely kind of the normal guy. Yeah. I think that’s it. … I’m proud of what I’ve done. You know, I’m proud of what I’ve accomplished and I certainly hope to make my mark again. You know, I’d like to do more than I’ve done before and I’d like to do it better than I did it before and, hopefully, this new project will give me that opportunity.”

You can find out more about Mason Reese’s production company Borgasmord Productions and his TV project Life Interrupted clicking here.

One Reply to “1970s Phenom, the Irrepressible Mason Reese, Returns to Acting after 31 Years: His Borgasmord Productions Shooting TV Pilot; Show Cast Like “The Expendables” of Sitcoms”